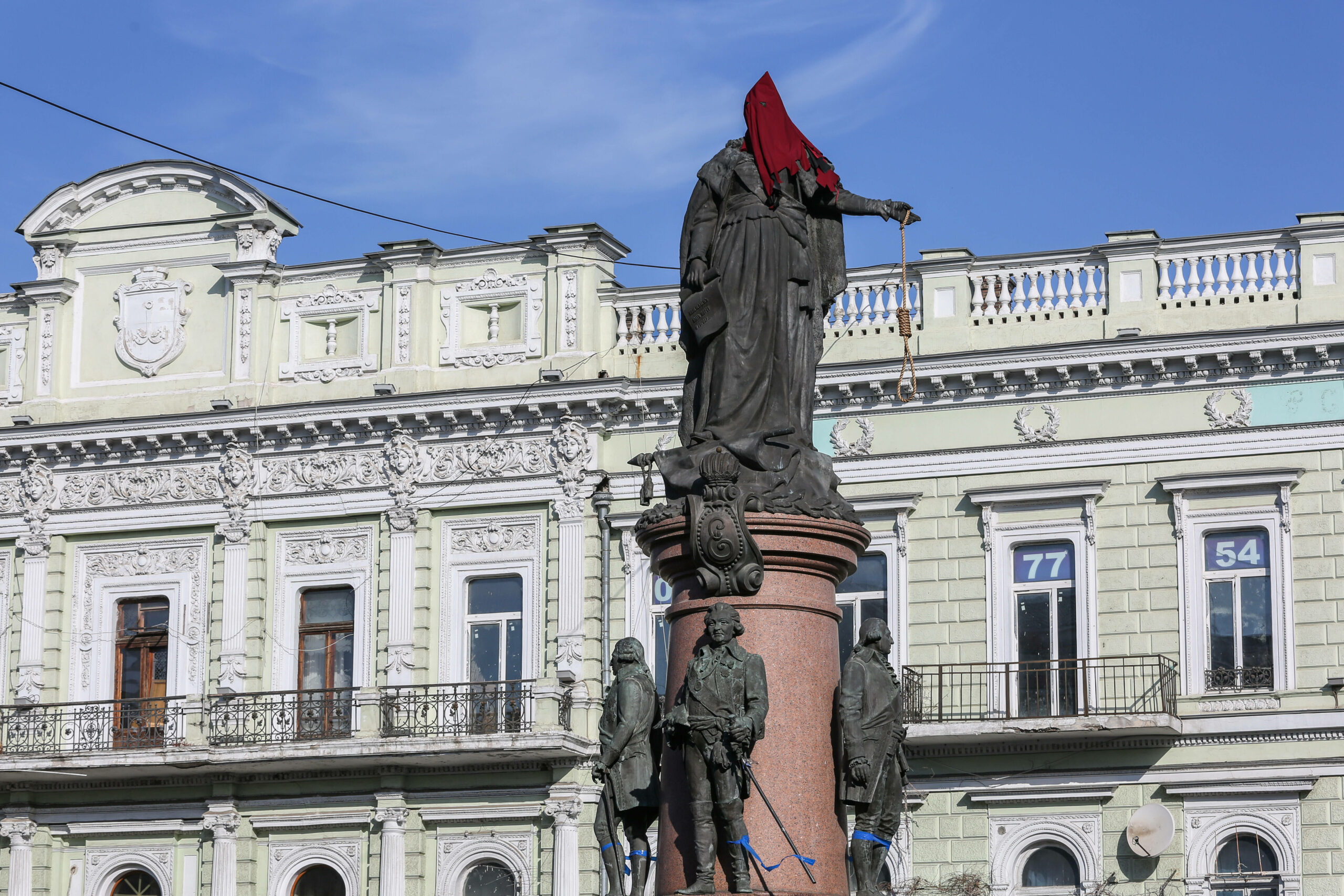 Since the beginning of Russia’s open armed invasion of Ukraine in February 2022, Ukrainian society has been living in a state of physical, ideological and information warfare. An important component of countering its impact involves bidding farewell to historical stereotypes in the cityscape.

Ukrainians are fighting for their freedom and independence both on the front line and in the home front. The southern Ukrainian city of Odesa, a partner city Regensburg in Germany, is no exception. Facing shelling, constant air raids and difficult economic conditions, Odesa residents, as well as residents of other Ukrainian cities, nevertheless hold various public events while conducting an active information campaign on the ideological front.

Due to the threat of Russian shelling, measures to preserve the historical center of Odesa have intensified. The issue of inscribing Odesa on the UNESCO World Heritage List is being considered under an expedited process, as Odesa is the only southern Ukrainian city that has preserved the late-eighteenth and nineteenth-century urban fabric of a multicultural city. For more than a century and a half, Odesa’s calling card has been the Opera House, Primorsky Boulevard, and the monument to Duke Richelieu. But this definitely does not apply to another monument, which is infamous far beyond Odesa: the monument to the Russian Empress Catherine II, located in the city center.

On the 280th day of Russia’s full-scale armed aggression against Ukraine, on November 30, 2022, at a meeting of the Odesa City Council, it was decided to dismantle the monument and move it to a museum. The press service of Odesa City Council reported that the decision was supported by 43 votes, with no one voting against it.1 Now the monument will be moved into temporary storage at the Odesa Art Museum.

This is not the first such action in Ukraine. At the beginning of November, a monument to the Russian poet Alexander Pushkin was dismantled in Kharkiv, the residents of Kharkiv will decide its further fate (to keep it in the museum or not) after the Victory of Ukraine.2 And in May 2022, Kyiv City Council supported the decision to dismantle almost 50 monuments and memorials associated with Russia and the USSR. Among them were monuments to Mykola Shchors on Shevchenko Boulevard and Pushkin on Peremohy Avenue.3 Even before this decision was taken, the city demolished the sculpture of workers under the Arch of Friendship of Peoples, which is now called the Arch of Freedom of the Ukrainian people.

Odesa residents were therefore not the first to initiate the continuation of the policy of decolonization and de-Russification, which began in 2014 and was revived in 2022. But it was not easy for Odesa residents to make such a decision. Society literally split into two camps: radicals who demanded the immediate dismantling of the monument to Catherine II and moderate supporters of the preservation of historical memory. But what historical past are we talking about?

The idea to erect a monument to Catherine II in Odesa arose in 1890, when preparations for the celebration of the 100th anniversary of the founding of the city began. The city government (the mayor was Hryhorii Marazli) announced a competition and the design by the architect Yurii Dmytrenko won. The construction of the monument took six years: the foundation stone was laid in 1894, with construction completed in 1900. The monument was a composition of five figures: in the center on the pedestal is the figure of Catherine II, at the foot – the figures of her companions Jose de Ribas, Franz de Volan, Grigory Potemkin and Platon Zubov. The models of the sculptures were made by sculptor Mykhailo Popov.

During the Ukrainian Revolution of 1917, the Ukrainian authorities of the city had a very negative attitude towards imperial monuments, rightly considering them part of propaganda for Russian culture. But there was neither time nor money to dismantle them, so the monument was simply covered with a thick cloth. The authorities in Odesa in those turbulent times was changing rapidly and the monument was dismantled after the establishment of Soviet power in 1920. During the entire period of Soviet rule, the sculptures of the companions were kept in the Odesa Museum of History and Local Lore.

In 2007, when Eduard Hurvits was the mayor of Odesa, the program of reconstruction of the historical appearance of Odesa was approved. As part of this program, the City Council decided to restore the monument, but under a new name: the monument to the Founders of the City rather than the Monument to Empress Catherine II in Odesa as Dmytrenko called it. All works took place on June 25, 2007, late at night, because some Odessans came out to protest. There were even fights between supporters and opponents of the restoration of the monument to Catherine II.4 So what was being disputed?

For a long time in the historical literature there was an opinion that Odesa was founded by order of Empress Catherine II in 1794. During the Russian Empire and the Soviet Union, the age of the city was counted from the time of its conquest by Russia. In this way, a claim to its eternal Russianness was made and the idea of the southern region of Ukraine as part of the Russian world was imposed. This idea was first formulated by the Odesa historian Apollon Skalkovsky. In his book on the history of Odesa, he argued that the „founder“ of the city was Empress Catherine II, who on May 27, 1794 issued an order to establish a port in the settlement of Hadzhibey.5 This fact was used by the Odesa authorities when they renamed the monument to Catherine II into the monument to the „founders“ of the city.

But was Odesa founded in 1794? No, it was not. There was that year no city of that name in existence in that year. The name „Odesa“ appeared for the first times in 1795 in the decree on the establishment of the Voznesensk province. It stated that the province included „Odesa, called Hadzhibey by Tatars“. Therefore, the Empress did not found Odesa, but only actually renamed the fortress city that existed long before her. Historians have not found any legal document that would certify the renaming of Hadzhibey to Odesa. Instead, at the end of the 19th century, another Odesa historian – Oleksii Markevych – drew attention to the first written mention of Kachibey (Hadzhibey) in 1415 in the chronicle of the Polish historian Jan Długosz.6 It is this date, as the first documented mention in sources, that many modern Ukrainian researchers consider the date of the beginning of the history of the settlement.

This historiographical discussion about the date of the foundation of Odesa became the basis for protests of Ukrainian public organizations of Odesa and historians who opposed the monument to the „Founders of Odesa“ (and in fact the restoration of the monument to the Russian Empress Catherine II). After all, Catherine II not only was not the founder of the city of Odesa, but also led an openly anti-Ukrainian policy, eliminated the autonomy of Ukraine in the 18th century, destroyed the Zaporizhian Sich, and introduced serfdom. In addition, the Verkhovna Rada of Ukraine by a special resolution in 2014 recognized the historical fact of the 600th anniversary of the city of Odesa.7

The situation escalated after February 24, 2022. The events in Odesa developed very rapidly: in May 2022, public activists voiced a proposal to demolish the monument to Catherine II as propaganda of the imperial Russian past; on July 13, 2022, an electronic petition to dismantle the monument in Odesa gained 25,000 votes; on August 1, President Volodymyr Zelensky’s response appeared, stating that the President appealed to the Odesa City Council to consider the issues raised in the petition in accordance with its powers; on August 16, the Minister of Culture and Information Policy Oleksandr Tkachenko said that he supported the idea of dismantling the monument, but noted that the decision was up to local deputies; the regional military administration recommended Odesa City Council dismantle the monuments to Catherine II and Alexander Suvorov. On September 10, unknown persons vandalized the monument to Catherine II, writing on the monument with red paint „Catherine = Putin“. Twice red paint was poured on the monument, while on September 18 a protest action was held near the monument to the „Founders of Odesa“. At the end of September, an online poll was initiated in Odesa, in which almost 8,000 Odesa residents took part. The result of the poll showed that the majority of respondents were in favor of dismantling the monument.8 In early November, local activists held another protest action: they put a red executioner’s hat on the monument to Catherine II in Odesa and hung a noose on her hand. The decision of Odesa City Council was, then, the final in this chain of events.

Thus, by New Year’s Day 2023, Odesa will say goodbye to the monument, which for decades has caused a mixed reaction both among Odesa residents and in Ukrainian society.